A new game on BSW by Mayfair Games ®

with screenshots to better understand the BSW interface

Atlantis was just released today on BSW and is already getting a lot of play!  Thanks to TheBoomer and all of those responsible for this cool game!

If you already know how to play, skim the rules looking for interface clues.  Otherwise this can be used as a primer for both learning how to play and learning to use the interface.

If you want to download this document, visit our downloads section located at:

If you have changes, additions, corrections, please email jeff@gamerjeff.com

OVERVIEW AND STARTING THE GAME

Atlantis is a game for 2-4 players.  This has been compared to Verflixxt, Cartegena and .  A screenshot of a game already in progress: 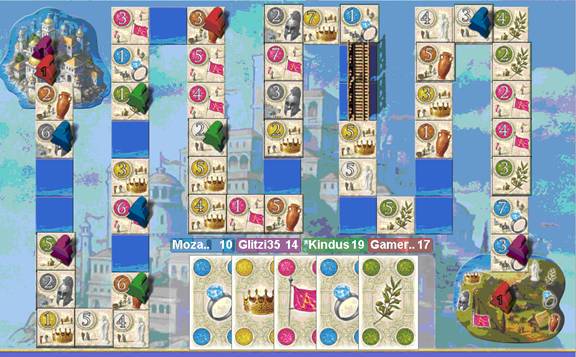 You start with your three meeples on the (top left) and try to get them to the Mainland (bottom right) scoring victory point tiles as you move.

There is a tile path over the water.  Some tile piles have 1 tile to be removed, some have 2 to be removed.  (You can see the difference on the screen by the depth of tiles surrounded by a slight black border.  For example the 1 and 5 tiles on bottom left are stacked two high, where the 4 is the last tile in that pile.)

You score victory points by moving your meeple and taking the tile that is directly behind your meeple off the board and adding the tile total to your victory points.  For example, in the screenshot above if the Green meeple on the bottom right had just moved to the Brown 6 then the Green player would take the White 4 tile off the board and score it.  At the end of your turn you will draw back one card into your hand plus one card for any meeple you have placed on the mainland.

Each person starts the game with 1 bridge and a starting hand of cards.   (The first person has 4 cards, second to start 5 cards, third six cards and fourth person seven cards.)  There is no limit to your hand size.

To play you click on a meeple and the interface will show you all possible moves as below: 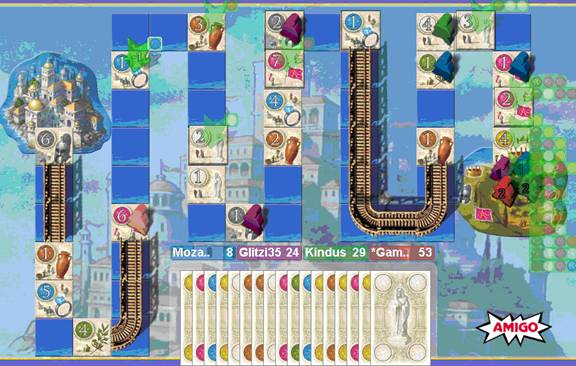 If you were the Red player trying to move the meeple on the Red 6 on the left, you could move it across the water to the first tile (blue 1) but it would cost you a blue card (which you have) and -1.  The minus penalty can be paid either by cards, victory points or a combination of both.

The minus for moving across water is the lowest tile on either side.  So in the example above the Red player is on a 6 moving to a 1, so the penalty is minus 1.  The number of water tiles does not matter.  Moving across bridges does not cost anything.  Once a bridge is placed it will continue to expand.  So again, in the example above if the Red player were to move to the Blue 1, the Red player would pay the -1 penalty, then pick up and score the Red 6 tile, then the bridge behind the Red 6 would expand to the Blue 1 tile (since the Red 6 tile would become water).

Here is an example of a pop-up window that you will see when you have to pay a penalty:

then you would have to pay either 5 points or 3 points.  The alternative of course is to use cards.  Just click on the card icon (the 0 on the screenshot two paragraphs back) and then click on a card in your hand, like below: 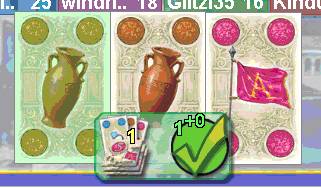 The card(s) you selected will be highlighted in green, the 0 card will change to the number you selected (in this case from 0 to 1) and then you will get a green checkmark to confirm your selection.  (In this case 1 card and 0 victory points – 1+0.)  You can combine this any way you want.  For example if you had to pay a minus 8 penalty, you could choose 3 cards and a 5 point victory chip.

At any time you can hover over a player’s name to see their victory points and if they have a bridge remaining like in the example below:

Hovering over GamerJeff’s name we see he has 1 bridge remaining and victory points of 5 and 3.

To place a bridge you click on the water tile you want the bridge to start at:

and then you get a confirmation pop-up on top of  your cards.

Once you click on the bridge icon (on the right) in the pop-up window, it will place your bridge like below:

If you ever have to move your meeple, and cannot make the jump for any reason, you may see a pop-up like this:

Meaning you do not have the right cards to pay for this move and you have to pay the penalty.

The winner will be the person with the most victory points after the End Game is triggered.  The “End of the Game” will trigger when any player gets all of their meeples to the the Mainland.  At that point, all players will take turns (the interface will do this for you automatically) moving their meeples to the mainland and paying (in cards and points) any penalties for final score.

WHERE CAN I FIND THIS GAME TO PLAY ON BSW?

There are two game rooms already set-up in Englishtown for the game.  Here is the prop file addition for those of you using the menu files set-up by Circle, Bliss and Moose_Head: